A gentleman starts drinking only in the afternoon. And as Gagnam is the Seoul’s mecca of the young, beautiful nobility, last Saturday’s Whisky (and Whiskey) Experience event kicked off after lunch, at 1 pm. Whisky may not be my day-time drink of choice (if the sun’s still out, I prefer a Negroni or sparkling white wine), but seeing the list of all the goodies that were being offered for a reasonable price, I couldn’t resist getting myself to the southern part of the city.

Let me talk you through what I did and saw there.

GladLive hotels market themselves as a lifestyle hotel for active urban entertainment seekers (in fact their motto is ‘Most Vibrant Playground in Urban Life’), being home to a multi-level bar, an afterhours club and offering ‘night-out’ packages. I’m not really convinced the theme of some of the interiors (the event took up 3 floors of the hotel) went along with the classic vibe of malt whiskies, and the space felt cramped at times, with people trying to squeeze in between sofas and tables, but it was a definite upgrade from previous events which usually took place in bars/clubs with even smaller, more uncomfortable spaces. 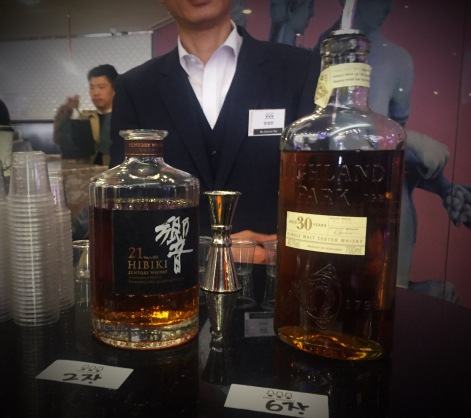 Some rare beauties, only for the eyes.

The Entry Level offered 105 whiskeys and 10 different other beverages, ranging from Scottish single malts, bourbons and ryes, blends and even some Japanese. I was left eyeing longingly the Ultra Premium offer such beauties, like Hibiki 21, Yamazaki 18, Macallan Rare Cask and Highland 30. Obviously I couldn’t go through all the 100 whiskeys, but I did my best to taste a few. Here are my own favourites:

Effective sales-marketing was being preformed at Redemption stand.

All in all the selection was wide, maybe even too wide, considering that there was a chance for totally beginner whisky enthusiasts to come for a tasting. For amateurs like me it was a treat, not having to seek out bars in the jungle of Seoul and look up their different offers, debating whether a trip to the other side of the city was worth that drop of rare eau de vie.

All the major distributors and alcohol (whisky) brands showed up at the event and so did some other beverage producers (see the pic). The event was mostly staffed by bartenders from major Seoul bars, and I would like to take the opportunity to thank them for their effort (if you read my previous post, you realize that they had been after a hard day’s night). As much as at each stand the bartenders and staff tried to be as helpful with choosing the whisky to taste, there lacked a guide, both in a booklet form and a pre-lecture? explanatory seminar? It would have been fine if this event had been targeted at just the people from within the industry and die-hard amateurs, but it seems that it had appetite to be much more. The girls from The Edit were covering the event, but not as MC-s, but rather as reporters for an after-show broadcast.

I maybe a spoiled brat, but I wouldn’t have mind some sort of tapas or finger food. I know we were all expected to be after lunch, but college has taught us all that food and water will help lots when drinking heavy weight (whisky starts off at 40%). 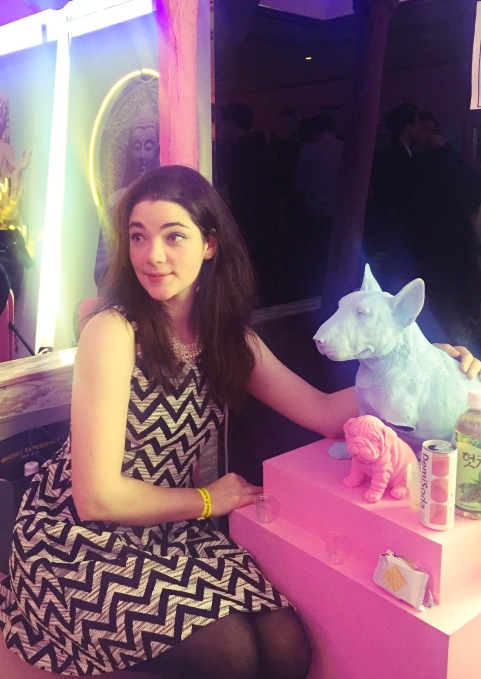 I honestly wasn’t sold by the pastel-colored, hipster budda convention of one of the floors, but the bullterrier was a doll.

So in short: this event has tons of potential and is necessary as is Gin, Rum or Tequilla Experience (although I would pass on the latter). We need such events if we want educated, aware consumers frequenting bars and buying bottles for home use. But that means stepping out of the ‘community’ box and reaching out to the general (legally-adult public). Yes, it means going more marketing-commercial.

But to be fair, it was fun, as fun as drinking during the day can be, we all got tipsy. And that was all a good thing.

For more information about such future events, check out Single Malt Korea.